Leave it to 98 Degrees to reform and announce a new project in the middle of a summer heatwave.

Jeff Timmons, brothers Nick and Drew Lachey, and Justin Jeffre are returning to the spotlight as a band for the first time in eight years for the “98 Days of Summer” campaign — and with it, the guys say, has come a newfound appreciation for music again.

The campaign, which launched this month, will feature 98 days of throwback photos, video clips and unreleased music on the group’s social media channels, culminating in the release of a remix EP titled Summer of 98, with new songs and remixes of the group’s most popular hits.

The idea came about after the guys spent much of 2020 in a Covid bubble together — time they eventually used to write and record new music. As part of their return, 98 Degrees will release a brand new single titled “Where Do You Wanna Go,” on July 9th, making it their first original release in more than eight years. The group will also make their return to the stage in August, performing at the NY State Fair.

Before New York though, the guys were in Los Angeles, where they spoke to Rolling Stone about nostalgia, the current state of pop music, and why you can’t call their latest return a comeback.

A lot of groups say they’re going on hiatus, but that’s really code for “break up.” Did you always intend to get back together?
Drew Lachey: Well we’ve been touring together and going out on the road and doing stuff here and there over the years, so for us, it’s never been a matter of like breaking up and getting back together. This is just the newest venture that we’re going on together.

Jeff Timmons: Well we had a 12-year hiatus (laughs).

The group was inactive from 2001 to 2013 before reforming in the summer of 2013 for The Package Tour, a joint outing with New Kids on the Block and Boyz II Men

Timmons: We never really officially broke up. It was just at the time, we all had different things going on. In my personal life, I was starting a young family, Nick had just gotten married and we were all going in different directions. And then 9/11 sort of set that mark for us. We were together finishing a long tour, 9/11 happened and then everything was in flux. Nobody knew what was going to happen. And so we were all like, ‘All right, let’s go to our families. All of us just went in different directions and stayed there for over a decade. But it wasn’t like a breakup or anything like that.”

What’s the motivation for getting back together this time around?
Nick Lachey: I think we still probably appreciate more than ever, the music we make together. We all love each other and still sing together and have developed a brotherhood, a true camaraderie. And we’ve all gone on to other things on our own, but there’s really nothing like getting together on stage and doing what we do, what we started out doing. We still love it. And it’s just all about the timing working out. And the time is definitely right right now.

How has your outlook on the music industry changed since you first started?
Timmons: Back in the day there was so much pressure, we had Nsync and Backstreet [Boys]; those guys were on fire at that time. And we put a tremendous amount of pressure on ourselves. So while we did appreciate everything that happened, I don’t know that we were taking everything in and enjoying the moment during that time. Now that we’re much older, we’re just kind of relishing in the moment and enjoying ourselves. The fans seem to be enjoying it more and they can kind of feel the energy from us when we’re up on stage. And I just think like, ‘Man, this is the kind of thing we should have been doing and embracing the first time around.’

Nick Lachey: We don’t put the same kind of pressure on ourselves and we’re enjoying it. We’re kind of smelling in the roses now whereas in the past, it was always, ‘What’s next?” We were caught up in this rollercoaster. And I think now we’re all more mature and have better perspective versus the kind of place that we were in back then. When you get older, you get smarter… hopefully (laughs).

Drew Lachey: Also now they appreciate how amazing I am, which they didn’t do in the past (laughs).

That’s not going to translate well in print.
Drew Lachey: Nothing about me translates well (laughs). 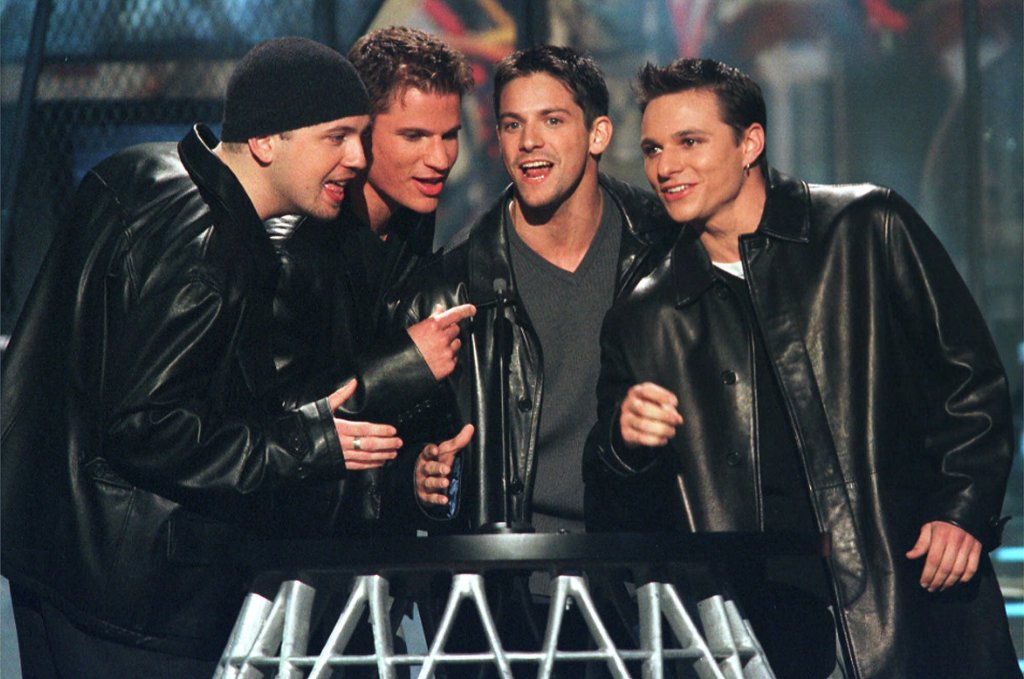 You’ve talked about this before, but has your opinion changed over the years about being categorized as a “boy band?”
Justin Jeffre: We tried to see ourselves as being in a separate world [as those other groups] but it was easy to put us all together.

Nick Lachey: Obviously we got swept up in it and no regrets because there was a lot of success. But it was never our intention to be part of the “boy band” movement. We really kind of modeled ourselves after Boyz II Men growing up, but I guess that [the boy band label] was just kind of what happened, and we were along for the ride.

Nsync, BSB, and 98 Degrees were the “trifecta” of big pop groups in the Nineties and early 2000s, and we really haven’t seen that degree of momentum since. Are there any younger artists that you see yourselves in?
Timmons: The Jonas Brothers are really cool. I love that they all do different things and you know, they kind of evolved from being a boy band into being like solo rock and R&B singers, and doing that song I loved, ‘Cake by the Ocean.’ They’ve been pretty interesting to follow. But there aren’t very many groups that are out there harmonizing and have those capabilities of singing a cappella. I’m sure One Direction had that ability, or The Wanted. But you know, the way it is today, you become a “brand” so fast, that it’s easy to get pulled away. So it’s really hard to find our version of ourselves in the groups today.

Drew Lachey: I think the new Bruno Mars song [‘Leave the Door Open,’ with Anderson .Paak], when I first heard it, I was like, ‘That could sound like us.’

Nick Lachey: I think Bieber’s great and I’m probably stating the obvious. But I appreciate him and respect him for all he’s been through in his life, and just coming out on the other side and still doing really, really well. And Billie Eilish, I’m like, ‘Whoa, what a talent she has.’ 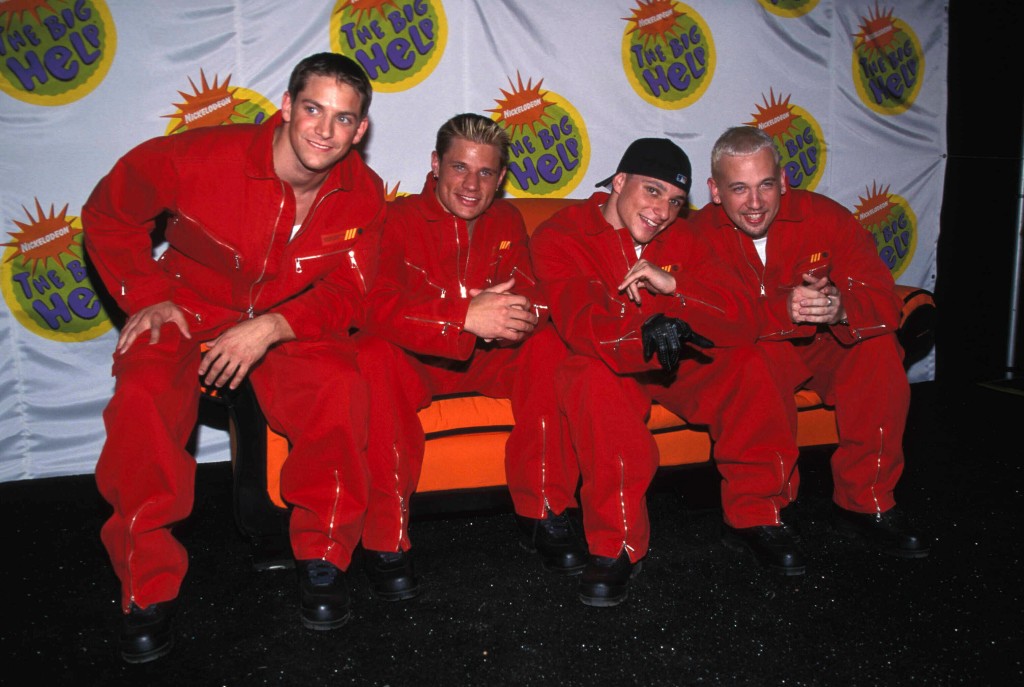 Nostalgia is so big right now with the recent Friends reunion, all the TV and movie remakes, and now, the return of 98 Degrees. Are you nostalgic people?
Nick Lachey: It’s kind of exciting to do a project like [“98 Degrees of Summer”]. It almost forces you to go back and relive all those memories and y’know, go through the old trunks of memorabilia and the action figures that were made of you.

Drew Lachey: We have 20+ years of experience, I mean, we have bad photos for days.

Nick Lachey: I also take a lot of pride in the fact that “I Do” has been a wedding song for so many people. You’re part of somebody’s life every time they put on their wedding video. And that’s a cool place to be y’know?

Any songs that you’d rather not sing again?
Jeffre: Back in the day ‘True to Your Heart‘ was one of those were maybe it felt kind of cheesy and stuff, but now when we do it, the crowd loves it.

Nick Lachey: I’ll tell you something interesting: we didn’t want to record ‘The Hardest Thing.’

Why?
Nick Lachey: I just didn’t like the song. It was the last song we recorded for the album and we weren’t really into it, but the label was like, ‘We really want you to record this song.’ And it ended up getting more airplay for us than any other song.

Jeffre: As soon as I played that song for my brother, he was like, ‘That’s the hit.’

Nick Lachey: But there was a line in there about ‘Doctor Zhivago’ and I was like, ‘This is the stupidest line in the history of music.’ And now it’s the line that people quote back to us all the time.

We’ve seen a lot of groups come up in the last few years that put out a few albums and then disband. What do you attribute your longevity to?
Drew Lachey: We’re four Midwestern guys, all from Ohio. We grew up with a similar work ethic and a similar focus and drive. I think what we went through together, you know, nobody else can understand or appreciate it. I mean, I’m sure the other groups have their similar bond, but these are the only three other guys who know exactly what my life was like and how it kind of went on. So I think we have a unique bond that we appreciate much more now. But I think we also just love making music together, and we’re excited to still be doing it. And we can’t wait for the fans to hear our new stuff.

Nick Lachey: I think the thing that defines us is work ethic. There were probably more talented groups out there, but we just flat out refused to go away. I mean, I think that you can have talent, but there’s a lot of talented people – you got to be willing and ready to work. And you know, we got in our cars and drove to L.A. and sang on street corners. And that’s still something I’m so proud of us for doing.

Jeffre: Part of our success, to have longevity, was that we always tried to treat people well. Somebody may have just been a P.A. back in the day but they may now be in some very powerful decision-making place years later. And they remember how you treated them.

Nick Lachey: But most importantly, don’t sleep with the program director’s girlfriend.

Is that a hypothetical?
Nick Lachey: Well…we’re adults now. But we can say that it is (laughs).