The pandemic isn’t going to end at any one moment. Joe Biden isn’t going to land on an aircraft carrier in a flight suit waving a giant “Mission Accomplished” banner. There won’t be a V-E Day-like celebration where church bells ring all across the country and strangers embrace each other in Times Square. And as the Delta variant continues to spread across the globe, causing infection spikes everywhere where from India to Ireland, it will likely be a long time before COVID-19 is just a traumatic memory.

But an important step towards normalcy was taken on Saturday night when Bruce Springsteen walked onto the stage at New York’s St. James Theater to begin an encore run of Springsteen on Broadway. It wasn’t just his first time facing a live audience since January 2020, but the first Broadway show of any sort since the start of the pandemic. And the capacity crowd, which included Steve Van Zandt, United States Secretary of Transportation Pete Buttigieg, Brian Williams, and many deep-pocketed Springsteen fans, welcomed him with the familiar “Brooooce” roar that drowned out the chants of the anti-vaccine protestors gathered outside the theater.

“It’s great to see everybody here tonight,” he told the crowd after opening up with “Growin’ Up” and slightly re-worked remarks about his youth. “Un-masked, sitting next to each other in one room. It’s a long time coming. It’s a big time thrill. What a year. Seventy-one years on the planet and I’ve never seen anything like this past year. And I was lucky. We stayed healthy and busy. I put out a record with the E Street Band. We did a film called A Letter To You. I did a radio show. I did a podcast with the President of the United States. I was handcuffed and thrown in jail.”

He’s referring, of course, to the incident in November 2020 where he was charged with a DUI in New Jersey’s Gateway National Recreation Area after drinking just two shots of tequila. Up until this show, he hadn’t commented on the matter publicly apart from his Zoom court appearance where the most serious charges were dropped and was just fined $540 for drinking alcohol in an area where it is banned.

“I didn’t wake up one morning, get on my motorcycle and say, ‘I think I’ll drive to jail,’” he said. “And then I had to go to Zoom Court! My case was the United States of America vs. Bruce Springsteen. That’s always comfortable to hear, that the entire nation is aligned against you. ‘You have managed to engage in an act so heinous that it was offended the entire fuckin’ United States! You, my recalcitrant, law-breaking, bridge-and-tunnel friend have drunk two shots of tequila.’ New Jersey, they love me there!”

It was a reminder that much has happened since the initial Springsteen on Broadway wrapped up in December 2018 after a 14-month run. That was before the pandemic, George Floyd, Black Lives Matter, Trump’s defeat in the 2020 election, The Big Lie, the insurrection, Biden’s inauguration, the vaccine rollout, and the gradual reopening of society. 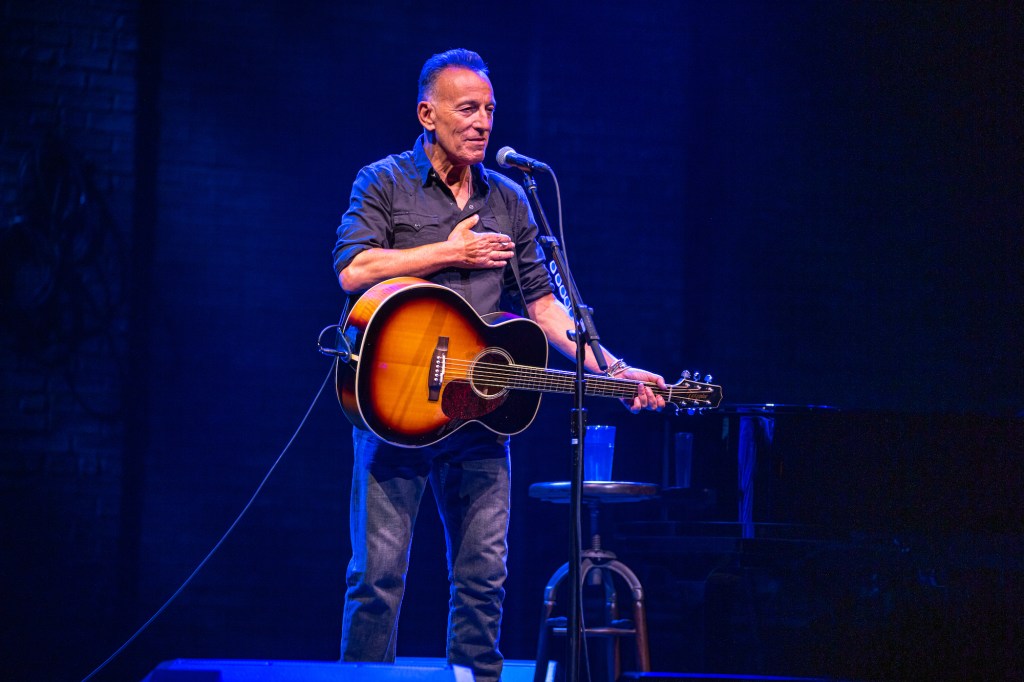 The general framework of the show remained intact, and the beats will be familiar to anyone that saw the last run or the Netflix special, but he did drop a handful of songs (“Brilliant Disguise,” “Long Walk Home” and “Born to Run”) and change around some of the spoken-word parts to reflect everything that has changed.

Sadly, his mother’s health has continued to deteriorate over the past few years, and he seemed to be fighting tears when updating the audience on her condition before a moving rendition of “The Wish.” “She’s ten years into Alzheimer’s,” he said. “She’s 95. But the need to dance is something that hasn’t left her. She can’t speak. She can’t stand. But when she sees me, there’s a smile, and there’s still a kiss. There’s a sound she makes that I know means, ‘I love you.’ When I put on Glenn Miller, she’ll start moving in her chair, reaching out for me to take her in my arms once more and dance.”

The first deviation from the 2017/18 song list came during the Patti Scialfa segment of the show where they followed up the usual “Tougher Than The Rest” with a fun, flirty duet on “Fire.” It was a great showcase for Scialfa’s vocals, and a better representation of their love for each other than the sorrowful “Brilliant Disguise” from the old show.

The political section followed, and he dropped his dated references to Trump and Charlottesville with a new speech about the world in 2021. “We are living in troubled and troubling times,” he said. “I don’t believe I’ve seen, certainly not in my lifetime, [a time] when democracy itself, not just who is going to be running the show for the next four years, but survival of democracy itself was as deeply threatened. The Rule of Law, Bill of Rights, and the Constitution have been so cavalierly bludgeoned, disrespect and tread upon that I’m frightened for us. I understand those folks out in the street. It’s scary times filled with confusion.”

At no point did he mention George Floyd or Black Lives Matter, but he followed that speech with a chilling “American Skin (41 Shots)” that made it clear exactly where his mind was at. This is a song that was written over 20 years ago as a response to the death of Guinean immigrant Amadou Diallo at the hands of the NYPD. Delivered just one day after the sentencing of Derek Chauvin, it was extremely potent. 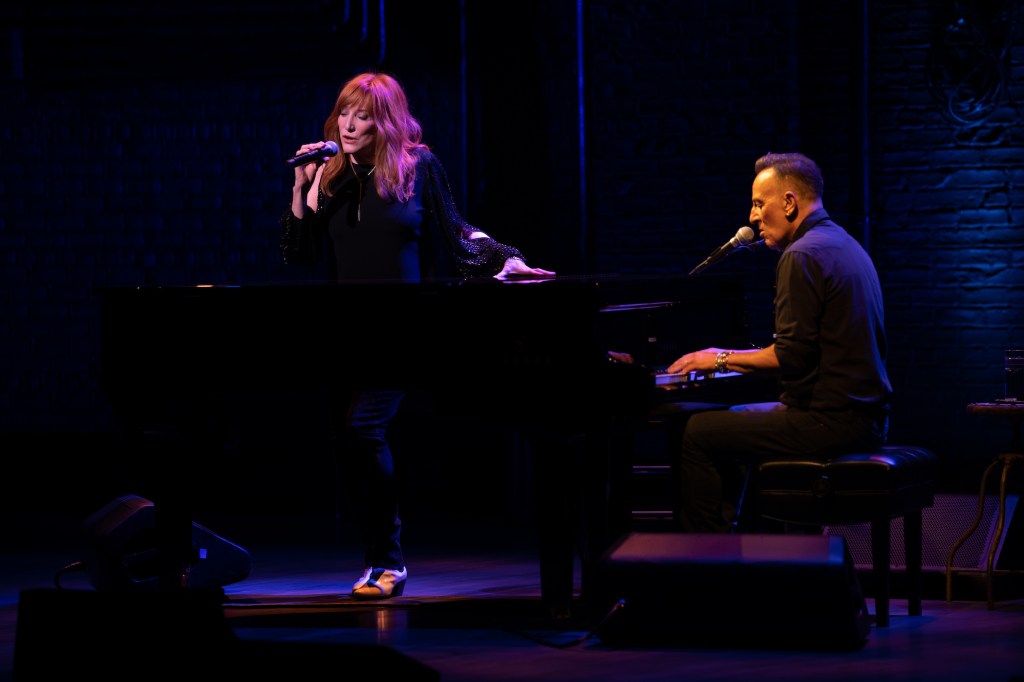 Many other parts of the show – including monologues about his childhood in Freehold, his father, Clarence Clemons, dodging the Vietnam draft, and driving cross-country in 1970 – were taken verbatim from the last run. But hearing them again after the nightmare of the pandemic, just as live music is returning to America, made them feel fresh again. And any excuse to hear “The Promised Land,” “Thunder Road” and “Tent Avenue Freeze-Out” in an intimate venue is extremely welcome.

It should be noted that the St. James Theatre is twice as large as the Walter Kerr Theatre, the original home of Springsteen on Broadway. The enormous stage made the show feel slightly less intimate, and it’s quite possible fans on the top tier struggled to hear him when he wandered away from the mic. (That said, the place is still about 50 times smaller than the usual places Springsteen plays.)

All the previous Broadway shows closed out with “Born to Run,” but he dropped it this time in favor of “I’ll See You In My Dreams” from A Letter To You. And coming after his speech about how nobody is truly gone as long as we remember them, it was the perfect ending.

If all goes according to plan, the world will see Springsteen back on the road with the E Street Band in 2022. Until then, he’s holding court at the St. James Theater and reminding fans (at least the vaccinated ones) that we’re in the home stretch of the pandemic and very good times await.