BTS’ Jimin describes himself as “introverted,” which may come as a surprise to anyone who’s seen his extraordinarily expressive dancing, or the moment he leans back and nails a high note in, say, “Magic Shop.” In the second of Rolling Stone’s breakout interviews with each of the seven members of BTS, Jimin contemplated his perfectionist streak, described his experience of the pandemic year, explained his love of dancing, and more. He gave his lengthy, thoughtful answers from a studio room in his label’s Seoul offices, wearing a zipped-up black winter coat with a white faux-fur hood, a large black bucket hat, and a white mask to protect a translator.

(In celebration of BTS’ appearance on the cover of Rolling Stone, we’re publishing individual digital covers with each member of the band; check back throughout the next week for more.)

Some fans think that you may be working on a mixtape. Is that true?
To be perfectly honest, there’s really nothing that’s ready or prepared. I am trying new things and really challenging myself with new things. But there is nothing that’s concrete or ready to put out.

What have you learned about yourself from the past year, in your time off the road?
I realized that we’ve been telling people to really love themselves and telling them to be stronger. This year, I began to tell myself these things as well, and convincing myself that this is also something I need to keep in mind. I also realized there were times when I was being too on the edge with people around me. And I thought that I should go back to the way I was, to realign my gears, so to speak, so that I can become again the person that I used to be when it comes to how I treat people around me and how I treat myself. Now, I see people reacting positively to even small positive changes.

For seven years or so, you had ARMY cheering for you. In the past year, because of the pandemic, you’ve faced silence. How have you adjusted to that?
I still have a series of negative thoughts about the situation. You know, “Why are we in this situation?” You know, “What are we doing?” And I didn’t want to acknowledge or admit or face the fact that we can’t see our friends and can’t do the things that we had been doing, as you said, for the past seven years.

What made you want to dance when you were young, and how did you realize that you had a gift for it?
First of all, I never thought that I’m good at dancing. But I began to like dancing when I was young. It was my friends who suggested that we go learn how to dance as an after-school activity. As I did more of it, I began to like it more and I started taking more lessons. And I became more and more immersed in it. And I realized, as I continued to learn how to dance, that I didn’t have the stress when I was dancing. It was my own space where I could go to a different world, where I didn’t have to think about other things. It was something that I could really immerse myself into. And it made me feel really free. And it made me really happy. And then even after I debuted and I still have those feelings and those emotions, dancing is the best answer. 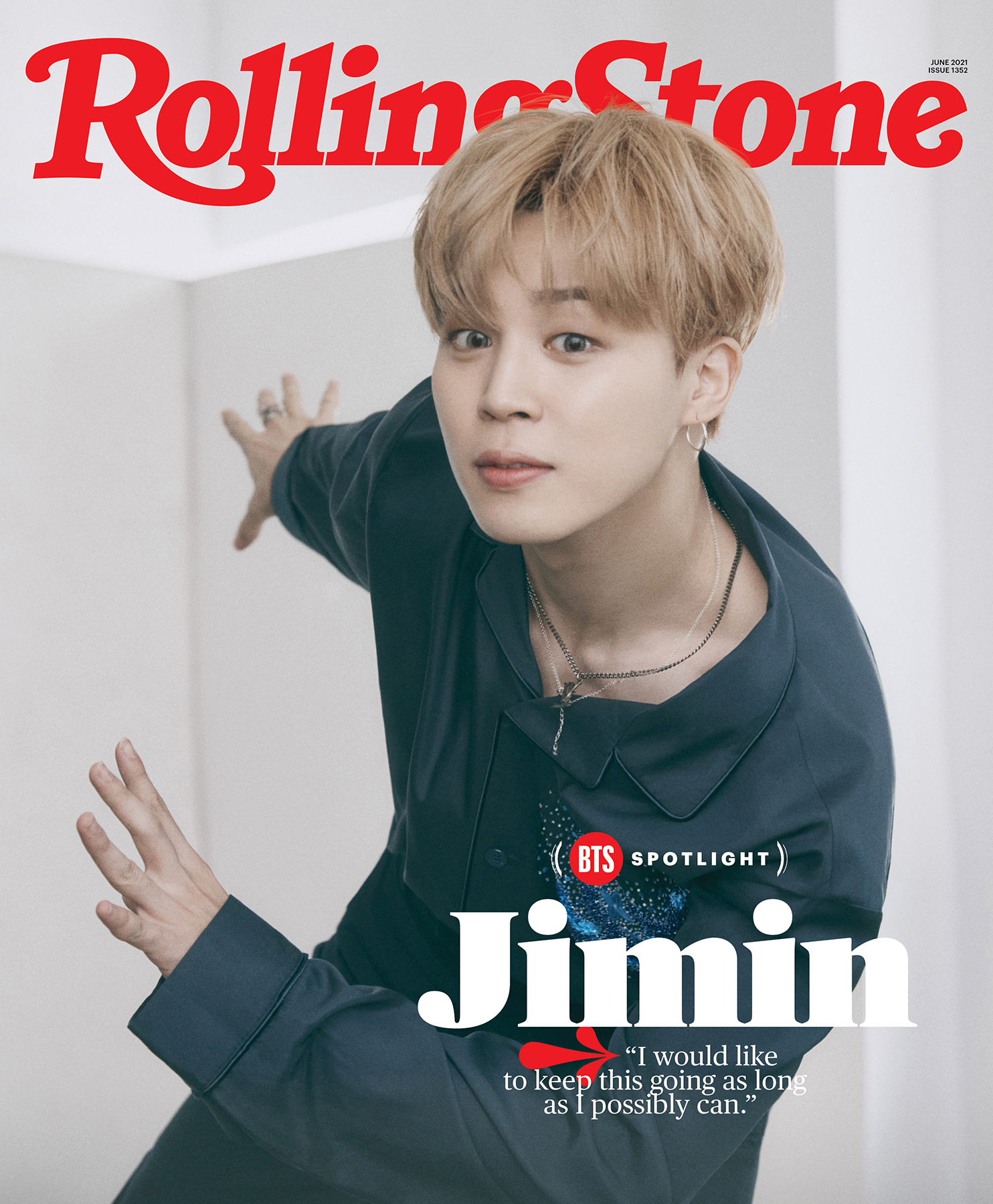 Jimin of BTS, photographed in Seoul on April 6th, 2021

I understand that you don’t like to make mistakes. But that could make you very hard on yourself, couldn’t it?
When I debuted, I had the shortest period of training. And I feel that I wasn’t fully ready and confident when we debuted.  I still have my shortcomings. I’m always moved by the fans who dedicate themselves — their time, their emotions, everything about themselves — to appreciating what I do and loving what I do. It makes me feel that for their sake and for their devotion that I shouldn’t make mistakes. So if you ask how do I learn to be easier on myself or more generous to myself, I think that will be something that will continue to be very difficult for me because of how I feel. When people point out things that I need more work in, it used to make me really angry at myself. Now I feel thankful if people point out things I need more work in. It makes me want to try harder.

Who were some of your early musical heroes?
There were a lot of artists that influenced me. Foreign artists — Michael Jackson, Usher — and also a lot of Korean artists. But a lot of my musical inspiration came from watching the other members do their work.

You were sort of the project coordinator for Be. What did you take away from that experience?
What I took away is first, how sincere the members were about making the album and making the music. So much time and so much effort goes into the creation of the music. What I also took away from it is I should also dedicate this kind of time and effort to making and creating music, and I should also try to make great music. I was really inspired by what the members contributed to the process and how we all worked on the album.

You’ve all said many times that there were differences between the members that you’ve overcome over the years. Can you elaborate at all on those differences?
[Laughs] So many that I couldn’t possibly list. We all had different personalities, personalities that clash. And I, for example, may consider myself to be a little bit slower, more contemplative or more introverted. And then there are other members who want do things much faster. They’re much more active and outgoing. And then there are other guys who are even more introverted and even slower than I am. So, of course, these personalities continued to clash. I think we’ve all come to develop an understanding that it is OK to have these differences, that some people are going to be slow, and some people are going to be fast. Sometimes we have to wait. Sometimes we have to ask more questions. I think all of us sort of developed an understanding of each other.

I love the song “Serendipity” from 2017. You really pushed yourself as a singer on that one. Could you share your memories of recording it?
I think this was the first time I really tried to highlight all the nuances of my voice and focus on each detail of my vocal expression. So it was very difficult to try to make sure that translated into the recording. And I just remember the recording process being very difficult because of how hard I tried to make sure that I focused on all of these details, making sure that they are expressed in the song.

Would you like to still be in BTS when you’re 40 years old?
I don’t think I’ve ever really thought of being not a part of this group. I can’t imagine what I would do on my own, what I would do without the team. Even before we debuted my goal was to continue to work with these people, to continue to sing with these people. I think when I become older, and I grow my own beard, I would like to think that at the end, when I’m too old to dance, I would just like to sit onstage with the other members and sing and engage with the fans. And communicate with the fans. I think that would be great, too. So I’d like to keep this going as long as I possibly can.

AL RANDALL BIO  I HAVE BEEN A RADIO AND MUSIC JUNKIE SINCE THE LATE 60’S.  GROWING UP IN CLEVELAND, OHIO, THERE WAS NEVER A SHORTAGE OF GREAT RADIO STATIONS THAT SATISFIED MY PALLET.  WIXY, WGAR, WMMS, WMJI, WHK, WWWE, AND WNCX WERE ALL MY FAVORITES GROWING UP.  I WAS A VERY EARLY FAN OF THE BEATLES, MOTOWN, THE BRITISH INVASION, SOUL/FUNK GROUPS, ROLLING STONES, PINK FLOYD, BEACH/SURFER MUSIC, GIRL GROUPS OF THE 60’S, AND DOO WOP MUSIC OF THE 50’S AND EARLY 60’S.  MY TASTES GOT INTO SOME METAL AND CLASSIC ROCK DURING MY YEARS SERVED IN THE UNITED STATES AIR FORCE.  I SETTLED IN NYC ALMOST 25 YEARS AGO AND HAVE NEVER LOOKED BACK.  I TRY TO KEEP IT REAL, LOOSE, AND FUN.  I HAVE A VERY WILD SENSE OF HUMOR.  I AM A WORLD TRAVELLER AND ENJOY DIFFERENT FOODS, CULTURES, AND LANGUAGES.    I DO THE OFF SHIFTS IN BETWEEN OUR SCHEDULED HOSTS AND OCCASSIONALY HAVE MY OWN SCHEDULED SEGMENTS.  OH, DID I MENTION MY OTHER DUTIES INCLUDE BEING THE STATION MANGER, PROGRAM DIRECTOR, AND COOK, BAKER, AND CANDLESTICK MAKER HERE AT OLDIES RADIO LIVE 365.  ENJOY THE MUSIC.  Wnyc-DB Oldies Radio Live 365 | New York NY | Facebook https://www.oldiesradiolive365.com oldiesradiolive365@gmail.com