Dave Navarro, a guy who’s spent years shredding guitar with Jane’s Addiction and served as a judge on a tattoo reality competition, has probably one of the most wholesome hobbies a rock star could have: collecting cuckoo clocks. He began purchasing the timepieces in the Nineties, and on a recent Zoom call, one hangs not so conspicuously on the wall behind him, as he and the Los Angeles-based artist PADHiA discuss their latest artistic collaboration. It’s a piece that threads Navarro’s longtime passion with his and PADHiA’s mutual interest in using visual arts to explore issues of mental health and trauma. It is indeed a cuckoo clock, but one that stands 15 feet tall, with a dial that’s been cut open to serve as a door into an immersive world of Navarro and PADHiA’s making.

Navarro and PADHiA’s cuckoo clock is featured in a new gallery show, Degrees of Separation, which opens June 25th and will run through July 1st at Julien’s in Beverly Hills, California. As Navarro notes, the show’s title is a nod to the fact that all the artists who contributed to the show are connected to each other, among them Risk, Plastic Jesus, Blek Le Rat, Mike Zenia, Estevan Oriol, WrdSmth and Billy Morrison.

Both Navarro and PADHiA have individual pieces in the show as well, but the cuckoo clock is part of their ongoing collaborative project, Duel Diagnosis, which they founded in 2018. PADHiA describes the piece as a “deconstructed cuckoo clock,” inside of which a chandelier hangs from the ceiling with all the gears and chains you’d see in a normal clock. Meanwhile, the five walls — it’s built into a corner — are covered with illustrations and artwork that run the gamut from street art-style with stencils and drippy paint, to pieces made from diamond dust and others from a still in-development technique in which Navarro and PADHiA drop ink into liquid resin, let it harden and layer to create Rorschach-esque inkblots.

“The viewer kind of loses a sense of time and space and reality,” PADHiA says of the installation.

“The idea of of walking into [a cuckoo clock] and displaying art within it was a way of inviting people into our world of beautiful craziness and having a gander, because we don’t think of crazy as bad,” Navarro adds. “We think of crazy as an opportunity. I think we’re being a little bit on the nose with it, but we’re also having a sense of humor about it.” 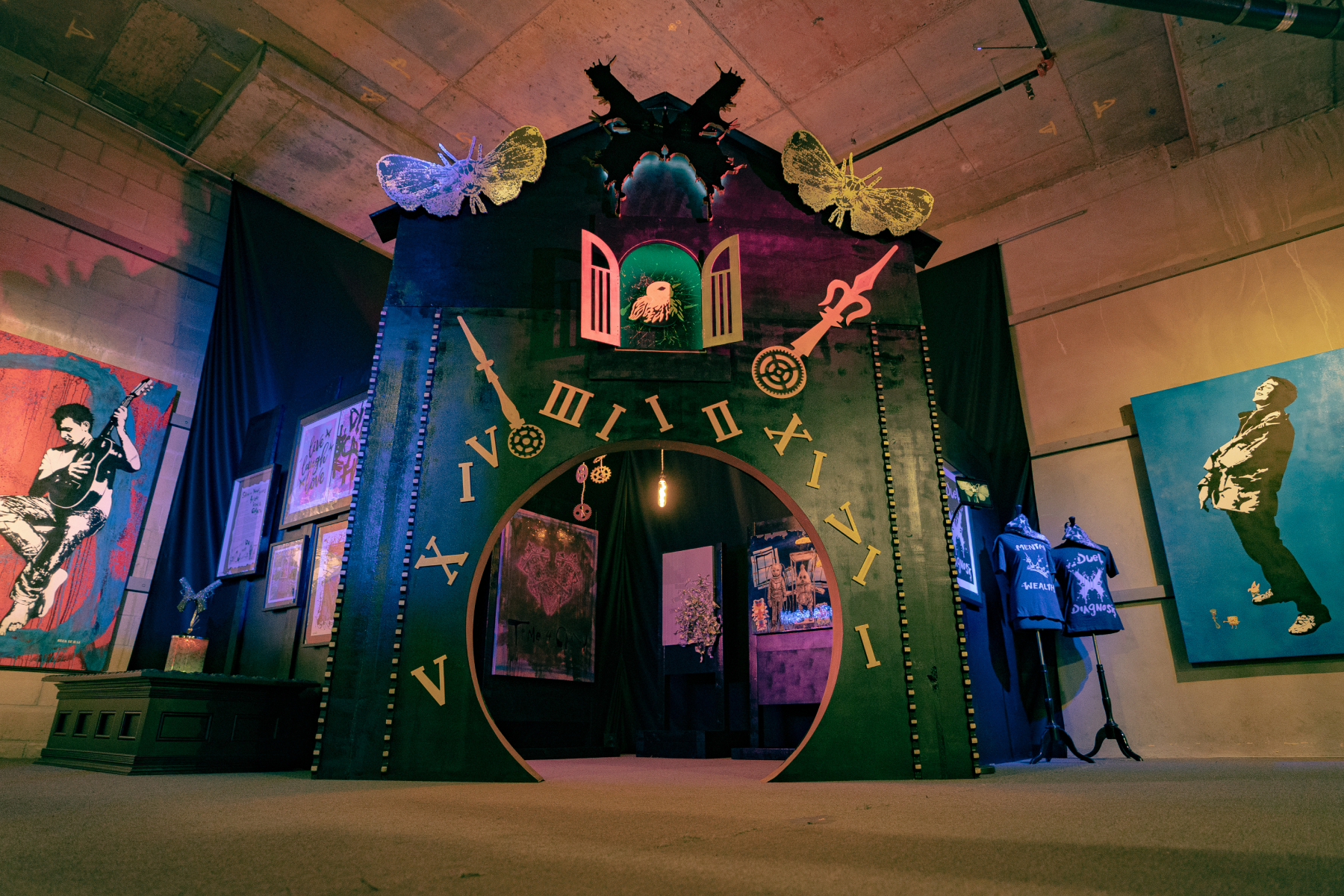 Dave Navarro and PADHiA’s cuckoo clock, with paintings by Blek Le Rat on either side.

Navarro and PADHiA became friends after Navarro purchased a piece of PADHiA’s that was part of her “Love Me Anyways” series under her Unfuk Yourself moniker. “When you bond over a saying like that, you develop a totally different friendship,” PADHiA says, while Navarro calls the piece “a nice handoff into how we ended up doing what we do.”

They wanted to meld the statement-based ethos of street art with messages about mental health, the ways we all struggle with it and, as PADHiA puts it, how “there is so much within us that’s viable and that we can use to create from and connect with if we stop coming from a place of shame and hiding.” The project began with a simple T-shirt idea and was intended to be an apparel line, but it quickly expanded into a universe all its own.

A key Duel Diagnosis piece is a mural on Fairfax in Los Angeles titled World, which features two characters in self-made isolation chambers that allow them to keep the world at a slight remove. They’ve also toyed with Rorschach inkblots, and poked fun at the kitschy home goods mantra, “Live, Laugh, Love,” with pieces that tack on a complementary triad: “Die, Cry, Hate.”

“Sometimes that kind of positive messaging that we see everywhere, which is lovely, can make someone struggling feel very alienated,” Navarro says. “We’re celebrating all of the human experience — your good days and bad days. Your days where you’re living, laughing and loving, and your days where you’re dying inside and crying and hating. Both are OK and both are human.”

“It’s a big Beverly Hills art show and we both have anxiety, so we built a house that we can run into and hide!” – Dave Navarro

Heavy as their subject matter can be, a sense of humor is central to the Duel Diagnosis ethos, something perfectly encapsulated by their new cuckoo clock. Navarro ties his love of the timepieces back to the cartoons he’d watch as a kid, where cuckoo clocks were often used to to signify craziness. The intricacies of that theme deepened as he learned more about the devices.

“So there’s this little bird trapped in a box with gears, wires and weights, and in watch- and clock-making, those are literally called ‘the complications,’” Navarro says. “The bird cannot fly out of the box because there are these two weights at the bottom that gravity pulls down to keep the time. That’s why the bird can’t reach its full potential.”

Looking ahead, PADHiA notes Duel Diagnosis are interested in doing more installations like the large cuckoo clock as a way of giving people “experiences where it makes you think from different perspectives and creates a catharsis.” The original plan for the cuckoo clock was to drop it in the middle of the desert, and future installations may be placed in such far-flung places, but Navarro notes there’s an added bonus to debuting it at the Degrees of Separation show.

“Let’s not kid ourselves: It’s a big Beverly Hills art show and we both have anxiety, so we built a house that we can run into and hide!” he cracks. PHADiA adds with a laugh, “Yeah, it’s nice and dark and quiet!”