When Taylor Swift announced that she was rerecording her first six albums after her label Big Machine sold her masters to Scooter Braun’s Ithaca Holdings — putting her legacy “in the hands,” as Swift said, “of someone who tried to dismantle it” — the move was heralded by many as a valiant attack in her ongoing battle for artists everywhere to regain control of their music. So when Fearless (Taylor’s Version), the first of those re-recorded albums, came out in April, it dropped with the extra weight of a moral imperative: The right thing to do, said Swifties, was to stream Fearless (Taylor’s Version). Streaming the original Fearless was, as one fan put it, “putting money in the pockets of selfish, money-hungry rats.”

But will fans continue to stream Taylor’s Versions? Despite the fact that there were 13 years and a pivot to pop between the recording of Fearless and the recording of Fearless (Taylor’s Version), there’s not too much sonically different between the two. There might be a little less twang, but for the most part, Swift played it straight, recreating the songs note by note, strum by strum. Yet, two months after the release of Fearless (Taylor’s Version), the gap between on-demand audio streams in the U.S. for Taylor’s Version and the original Fearless is starting to narrow to eye-squinting margins; in some cases, the original versions have started to surpass weekly streams for the re-records. It’s natural, of course, for songs to see a steady dropoff in streams in the months following an album’s release, and most don’t start to stabilize until about four months later. 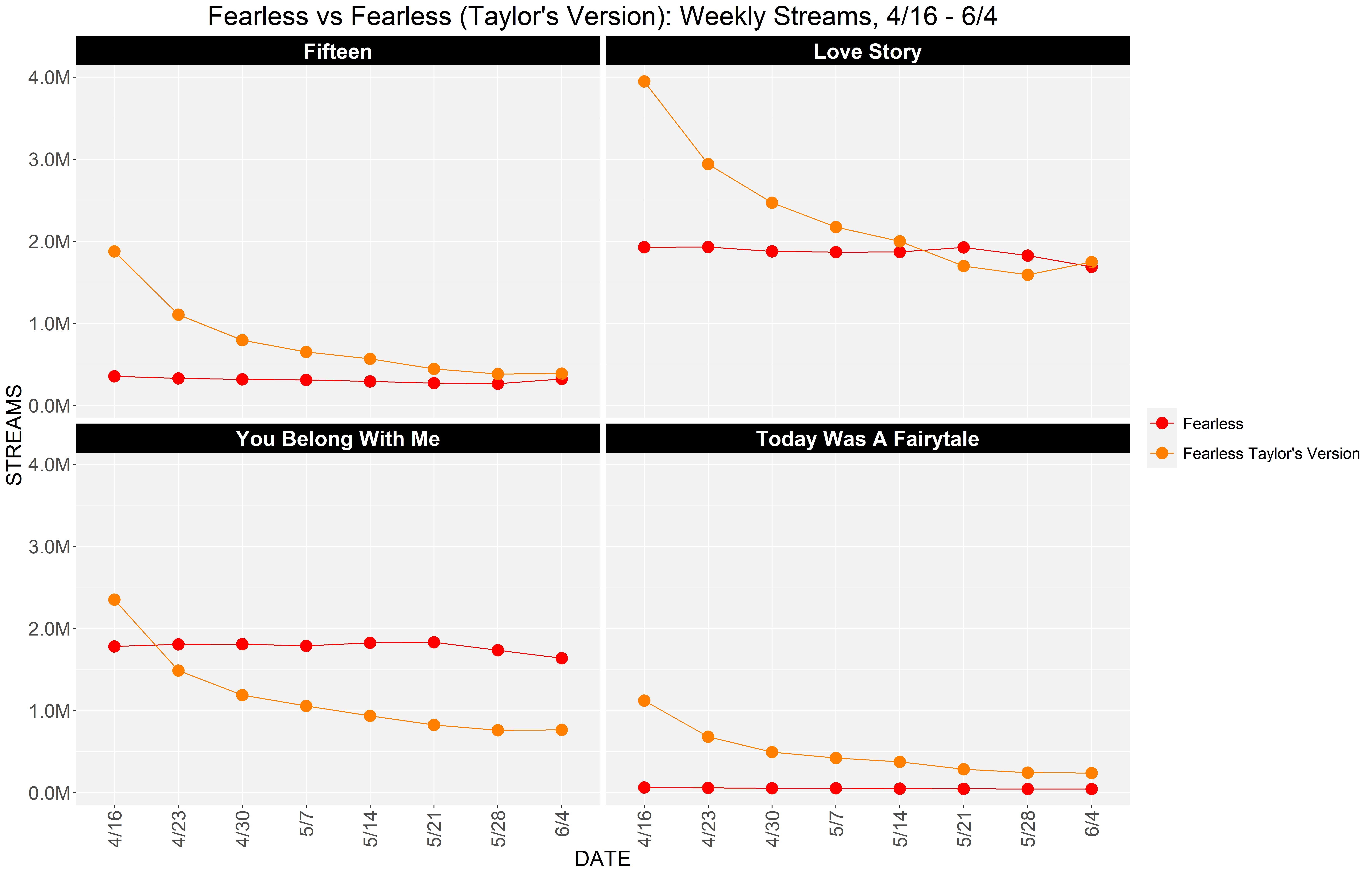 So far, the album’s two biggest songs, “Love Story” and “You Belong With Me,” are the ones where original Fearless streams are starting to overtake Fearless (Taylor’s Version). (Though during the week of June 4th through June 11th, “Love Story (Taylor Version)” was narrowly out-streaming the original.) But it’s the new versions of deep cuts like “Forever & Always” and “Hey Stephen” that are out-streaming the originals — a good indication that diehard Swifties are still streaming Taylor’s Version, while casual listeners may be more likely to cue up the original.

Both Spotify and Apple Music seem to be primarily promoting Swift’s re-records on their editorial playlists, though original versions appear on some era-specific Spotify playlists like 2000s Country. But there’s another factor besides playlist promotion that may be at play: Which version shows up when a user searches for a song.

Unlike playlist placement, which is selected by humans, what is prioritized in search seems to be in the hands of an algorithm — one likely based on popularity. For example, if you search “Love Story” or “You Belong With Me,” the original version shows up first on both Spotify and Apple Music. But “Forever & Always,” a less celebrated track off the album, shows up with the re-recorded version first. (Apple Music and Spotify declined to comment to Rolling Stone on whether the platforms would consider bypassing the algorithm to promote Swift’s re-records.) In programmed streams, as on Pandora, the original versions seem to be overwhelmingly out-streaming the new versions

While Fearless (Taylor’s Version) hasn’t been a total annihilation of Scooter et. al, it’s certainly delivered a blow. Streams for the original Fearless have only increased 10% in the past year, below the overall 15% increase in streams industry wide, and well behind the increase that other pre-1989 Taylor albums have seen. Her debut, for example, has seen a 27% increase in on-demand audio streams, while Speak Now has seen an increase of 47%.