Artists who found themselves recording music in lockdown last year were often split between two creative paths: those geared towards introspection, and those who anticipated the post-pandemic hedonism to come in summer 2021. Loraine James, meanwhile, found a way to synthesize both states of mind. The London-based producer’s latest album, Reflection, delivers fully on the promise of its title, not only offering a nuanced, distorted take on the sound of U.K. club music, but also closely examining — through its anxious beats, fragmented lyrics, and occasional serenity — what it means to be a part of the social scene that comes with it.

Reflection marks the 25-year-old producer’s third major release in three years, following her acclaimed 2019 debut, You and I, and the Nothing EP that she released earlier during the pandemic. “It’s the first proper thing I’ve made where I really enjoyed it,” James says over Zoom from her home in London.

In between its slippery melodies, Reflection’s lyrics take on a more personal approach than James’ prior work. She channels her musings on identity, community, and self-assurance through a cadre of guest vocalists, like soft-spoken rapper Le3 bLACK on “Black Ting” (“No more trying for real shit/No more crying, it’s blatant”) and Eden Samara on the sublime “Running Like That” (“I’m running from them all endlessly/They know I’m hiding”). But more often than not, it’s James herself voicing her own preoccupations. “I like the simple stuff/You like the simple things/What does that bring?” she coolly asks on the album’s lead single.

James is quick to point out how the words in her music can be just as blunt and jagged as her drum programming. “I’m just not great at writing,” she says sheepishly. “I like to just say three things and leave it at that…keep it short and sweet.” Nevertheless, she gets her point across: On “Self Doubt (Leaving the Club Early),” she questions an insular dance scene with diminishing returns just as much as she questions her own place within it. “Hate the music that I’m playing/That is why you’re not staying,” James mutters. “That’s why thеre’s no dancing/There is no romancing/There is no drinking.”

Growing up in London’s Alma Estate towers, James had awareness of the city’s nightlife scene but was initially interested in other genres. Her mother introduced her to calypso and funk, and as a teenager James was drawn to pop-punk and emo bands like Paramore and Death Cab for Cutie. In college at the University of Westminster, she majored in Commercial Music — essentially a fast track into becoming a producer of sleek, radio-friendly pop songs. 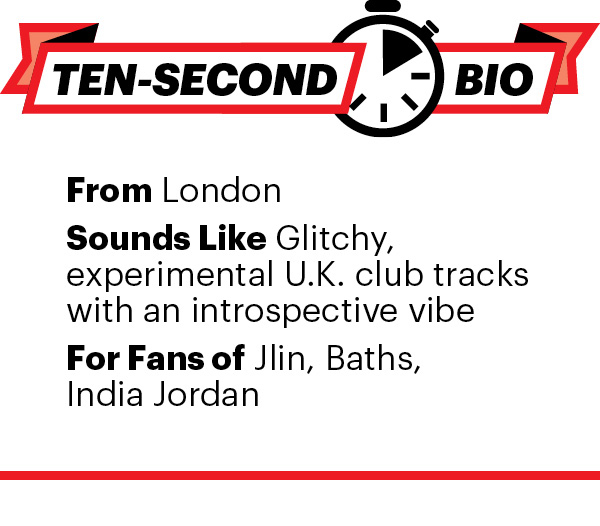 In her spare time, James started to produce electronic and ambient tracks that were anything but ordinary. Describing her glitchy sound, James talks about songs needing a “kick” every few seconds to change up the beat. “I think it could only interest people and myself for so long,” she says. “I like to switch it up, drawing patterns to sort of confuse people, hook people on, throw people off. Sometimes I just do it for humor, as a joke, but also, it kind of sounds cool.” You can hear it best on the track “On the Lake Outside,” featuring Baths, which starts out harmonious before switching to the most chaotic breakdown on the album halfway through.

Despite her education, James didn’t set out to make music for a full-time living — she expected to spend her life as a teacher, like her mother — and she doesn’t hold back today from criticizing how other producers within the EDM industry have behaved during the pandemic. As a queer black woman, she was disheartened to see many celebrity DJs ignore the George Floyd protests that occurred around the globe last summer, instead choosing to play at raves where attendees didn’t wear masks nor keep socially distanced.

Even aside from her dissatisfaction with the scene, James is looking to take her experiments further beyond the boundaries of “club music” than they already are. She’s gone back to recording with MIDI guitar, one of the first tools she learned as a producer, and is hoping to incorporate more rock-like sounds into her work. “I’ve kind of gone full-circle,” she says, then laughs at her own idea of a “MIDI electronic music” hybrid sound. Still, it’s a mix that might just be weird enough to work.