On “Free Ride,” the first single from Mykki Blanco’s new mini-LP Broken Hearts & Beauty Sleep, the musician constructs a tabernacle from which to worship the sensation of love. The accompanying video features Blanco refiguring tropes of family, community, and celebration to more inclusive ends. What might read as dysfunctional — multiple generations dwelling in a rickety RV — is recast with gentle reverence. Blanco’s gift has always been the queering of perspective, refusing to stay fixed in any particular mode. Broken Hearts & Beauty Sleep brings that framework to notions of love and loss. The result is a profoundly moving meditation on what it means to care and be cared for. Over Zoom, Blanco says the timing of the project’s release, just as the world re-emerges from over a year in lockdown, feels divine. While it wasn’t their goal in recording the album, Broken Hearts & Beauty Sleep contends with the contrasting impulses tied to the return to normalcy. Its songs are about making space for longing and making space to heal one’s trauma; about intimately knowing the contours of your heartache and dedicating yourself to the hope of finding true love.

“Free Ride” flutters gently between buoyant drums and angelic piano chords. Blanco’s declaration on the song’s chorus: “What I wouldn’t do for love / What I wouldn’t give for love,” is sung like a prayer to the heavens. Co-produced by FaltyDL and Hudson Mohawke, the track was recorded with Mykal Kilgore, Leah King, and L1ZY, who provide backing vocals on a number of songs on the album. Like the Dev Hynes-assisted “It’s Not My Choice,” which reprises “Free Ride’s” piano melody, making for the kind of cohesive sonic landscape present on albums from an earlier time. “I was super inspired by this kind of Nile Rodgers vibe where you would have the same chorus of people doing every song on the album, almost like we were like a group,” Blanco explains.

Blanco’s inspiration for the record was the Quiet Storm radio format that arose at the end of the Seventies. A staple in the growth of contemporary black music, radio DJs at the time gave rise to a distinct subgenre of R&B, typified by smooth, jazz-inspired ballads about love and romance. It’s music you might describe today as grown and sexy. “Quiet Storm was a big thing for Broken Hearts and Beauty Sleep because that was the music that I would hear a lot when I was a teenager in the car with my mom,” Blanco explains. “For some reason, I got super inspired by the music of Luther Vandross and Anita Baker. I was like ‘what would my take on this kind of like early Eighties smooth soul be like?’”

Up to this point, Blanco’s decade-long career has been defined by a much more overt type of storm. After coming on to the scene through the more unconventional worlds of performance art and poetry, Blanco gained a reputation in underground circles for a raw and freewheeling mix of hip-hop, punk, and noise. Their pair of 2012 releases — Mykki Blanco & the Mutant Angels and Cosmic Angel: The Illuminati Prince/ss — were an easy five years ahead of their time. The production on both tapes were sonically varied,  blending industrial and experimental electronics with stream-of-conscious rapping. Sort of like a proto –Yeezus, except instead of rapping about falling in love with a Kardashian, Blanco rapped with a sly wit about the superfluity of gender. Still, despite the technical proficiency on display, outsized attention was paid to everything except the music. Blanco’s forthrightness about their gender identity and, more recently, about their HIV status, came just before a generational shift on concerns of sexuality would have made them commonplace conversations.

“Identity politics has always been this huge thing that kind of overshadows my art,” Blanco says. “Actually, I’ll take that back. I don’t want to say overshadow. Sometimes, it has been so front and center and I’ve put myself at the center of it. Even though I’m happy to have been a part of some of these watershed moments with gender identity, it was this thing for me where I was like ‘oh, shit, but who am I as a musician?’” 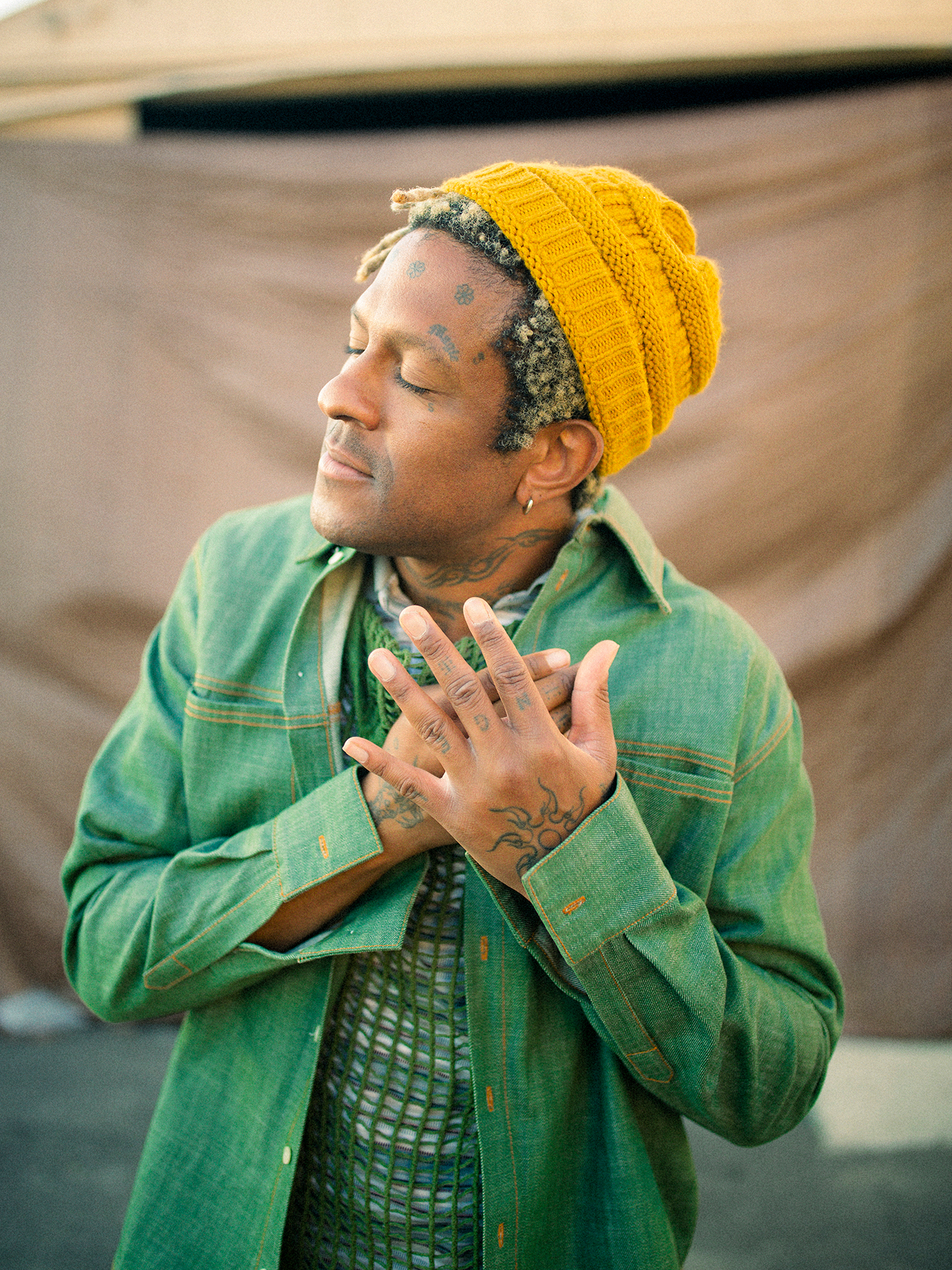 Blanco says that after their proper 2016 debut, Mykki, they came to a different understanding about where they wanted to take their music.“I was really brutally honest with myself where I was like damn if I wasn’t me would I be able to say, ‘Man this entire Mykki Blanco record is really awesome,” they said. “When I realized that I had not had that experience of my own music, a huge paradigm shift happened in my head. I think what happened was the natural progression of anyone who lives their life in this industry, who loves what they do. It’s kind of that thing where you start to dissect yourself and think ‘how can I be better?’”

Blanco says it started with a commitment to no longer using samples. “From that initial nucleus of a thought came what would become really these next two albums,” they said, referencing Broken Hearts & Beauty Sleep and its follow-up, slated for 2022. “You would never think this, but one of my favorite bands of all time is Crosby, Stills, Nash, and Young. If you listen to my music you’d probably never think that, but it’s true.” Blanco says they sat with executive producer FaltyDL and listened to a host of CSNY records finding instrumental inspiration. “It would be like okay let’s get in that instrument and let’s create some loops, and then maybe let’s have a flute player and a guitar player come in at the same time,” Blanco says. “So, it was this completely organic and new way of working. It was magical because, in a few months time, I was like ‘oh, shit I’m making music that’s entirely mine now.’”

The nine tracks on the LP are well-served by Blanco’s new commitment to instrumentation. Sounds blossom and build, like on album-opener “Trust A Little Bit,” which utilizes a slow-rolling piano chord progression to guide Blanco’s sermon-like delivery. It’s a breakup song rapped like a church testimonial. As Blanco’s bars grow more rapid-fire, new instruments are introduced. A tambourine. Claps. Backing vocals. By the time the track ends we’re somewhere rhapsodic. “Summer Fling,” about the agony and ecstasy of single life in the summer, lands like a modern-day ballad. Kari Faux is a welcome collaborator, bringing the song’s bouncy cadence into a rousing verse warning potential suitors to keep their emotions in check. Sonically, it closes on more somber chords, paving the way for the decidedly heartbroken single “It’s Not My Choice.” The entire record is a display of the kind of sequencing that offers credence to elder generations enduring appreciation for the classics. Listening to albums all the way through simply hits different.

A decade into their career, Blanco’s new approach comes at the start of a new era for the trailblazing musician. Broken Hearts & Beauty Sleep is their first release with the label Transgressive records, which Mykki signed to earlier this year. And the album serves as something of a breakup record, too. Blanco says they wrote many of the songs following the end a long-term relationship in late 2019. Now, newly settled in Los Angeles (Blanco spent the day before our call mattress shopping) the future seems full of hope.

“I just moved into a new apartment in Los Angeles and this is the first lease that I’ve signed since we broke up,” They said. “If my life has shown me anything it’s that with perseverance and honesty with yourself as an artist, things will work out.”