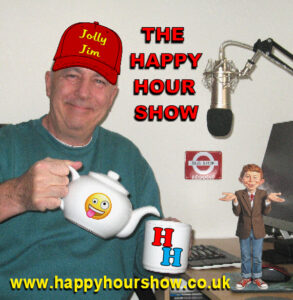 Like many radio presenters of a ‘certain age’, I caught the radio ‘bug’ when I listened to the British ‘pirate’ sations in the 1960s on my transistor radio. The jingles were my favourite part and ‘Big L’ had the best ones (and I’m now proud to say that I have some personalized versions on my show!).

In the seventies, I started broadcasting on a hospital radio station in Surrey and one of my shows won a national competition for best hospital radio programme. Noel Edmonds was one of the judges!

In 1976, I became a Butlin’s redcoat entertainer presenting music and chat from their Radio Butlin studios at Clacton in Essex. Great fun, but very hard work.

In the 1990’s, I did the weekday morning show on Eclipse FM which broadcast on cable and FM. One of our directors was the legendary Dave Cash.

A couple of years ago, I did a spell on the weekday afternoon show of a commercial station at the seaside in East Sussex.

My most embarrassing moments in radio were interviewing Bo Didley who insisted I call him ‘Mr. Didley’, and when I interviewed the comedian Richard Digance and I got a nose-bleed halfway through!

I now really enjoy presenting my weekly Happy Hour show – and I hope you’ll enjoy listening to it!

REMEMBER THE 80’S WITH OWEN ANDREW

BLAST FROM THE PAST ROCK AND ROLL SHOW