Two things sustained country star Thomas Rhett during the difficulty of a year in quarantine: time with his family in the great outdoors and music. Now, he’s put both of those loves front and center. This March, he released Country Again: Side A, the first disc of a double album that collects the best of what he wrote and recorded in lockdown. And this June, he launched a footwear collaboration with his favorite outdoor sandal brand Chaco, all of it inspired by his time spent wading in rivers fly fishing. We caught up with Thomas Rhett to discuss the songs and natural sceneries that shape his life.

Let’s start with the album — where did the idea of the double album come to you? Did you just write a ton of songs during quarantine?

2020 hit and me and every writer in town had nothing but time on their hands. So, we just started to write and write and write. I’ve always wanted to do a double album, and I knew that I wanted to do this record in two parts to allow people to soak in one half of it and then get excited for the next half. We probably wrote 250 songs for this record, and so whittling it down into 50 was hard.

Yeah, not all of them were good, though. We definitely had to go through and pick what was good and what was great, and what was terrible. We ended up with about 25 to 30 songs that we thought were really great for this project. The first half has been such a cool success for us, just getting to watch the comments has been really awesome [while we’re] gearing up to put out the second half.

You’ve said that with this album, you were posing questions like, “Who am I? Who is Thomas Rhett without a microphone or a guitar or a stage?” and I think a lot of people were asking similar questions during quarantine. What are some of the answers you found?

Well, I feel like my whole career has been a constant mission for more. Whether that was more success or whether it was bigger crowds or… I just thought there was always a next level that I couldn’t wait to be at. And I noticed that I never really was taking the time to really settle in and be like, “Man, what we’re doing right now is very cool.” I’ve always been a very driven, perfectionist human being. And I think 2020 was like, “Hey dude, this is your chance to just chill for a second.” And so, when I finally did, I don’t think I wrote a song for 40 or 50 days, which might be the longest I’ve gone in 10 years. And I just noticed that when I came back, I had gotten to live so much life in those 50 days – being a dad, being a husband, and being a friend.

I think that’s where a lot of the inspiration for these songs came from, especially “Country Again” and “More Time Fishin’.” Those two songs were basically just like, “Man, I’ve just been going at such a fast pace for so long, but it feels really nice to be able to settle in and just be content [with] where I’m at for the first time in forever.” And I think a lot of artists felt that way.

I wanted to ask you about the album title, Country Again. Did you feel you had strayed from country?

I think country is such a synonym for a lot of different words. And for me, ‘simple’ would be the word that most describes country to me, the lifestyle. And so, every single line in that song is extremely personal. I had quit hunting and fishing with my dad because I just was into other things. Or [I] hadn’t seen buddies from college in five years that I finally got to reconnect with last year and this year.

I never was off my phone, checking Instagram or seeing how many tickets we sold in a town or what my song was doing on the chart. And finally, for a second, I got to stop and just breathe. And that whole idea of, “Man, it just feels good to get back to my roots again. So that’s more what that song means to me rather than a genre of music that I was trying to create.

That’s kind of what “More Time Fishin’” is about, yeah?

“More Time Fishin’” really was just like, I don’t want to be figuring out who I am when I’m 80. I hope I have it locked in by then. I don’t want to look back at my life and feel like all I did was work. I want to look back at it and say that I made a lot of amazing memories with my kids and with my family. And so the song is kind of about fishing, but more so just about looking back and making sure that you really soaked up the great moments that were in front of you.

Speaking of fishing, what’s the best catch you’ve ever had?

Man, I got to catch a 22-inch brown trout when I was up in Montana. And I think the reason I love fly fishing so much is because it’s one of those pastimes where you can literally just be on a river, and it’s just you against yourself. And whether you catch anything or not, you feel like you just had five or six hours of nothing but serenity. It’s about the only thing that I’ve never been like, “I have to perfect this.” I just like to be here.

Your Chaco collection is inspired by fishing and your love of the great outdoors — how did you link up with them?

Me and my wife took a trip out to Montana and got to wade the Boulder River, which is right there next to Livingston, Montana. And that’s sort of where my passion for fly fishing started. And I remember we posted a family picture of basically all my family in Chaco. And they reached out and were like, “This is amazing.” And I was like, “We should work together.” And all of a sudden, here we are launching a three-series collection. 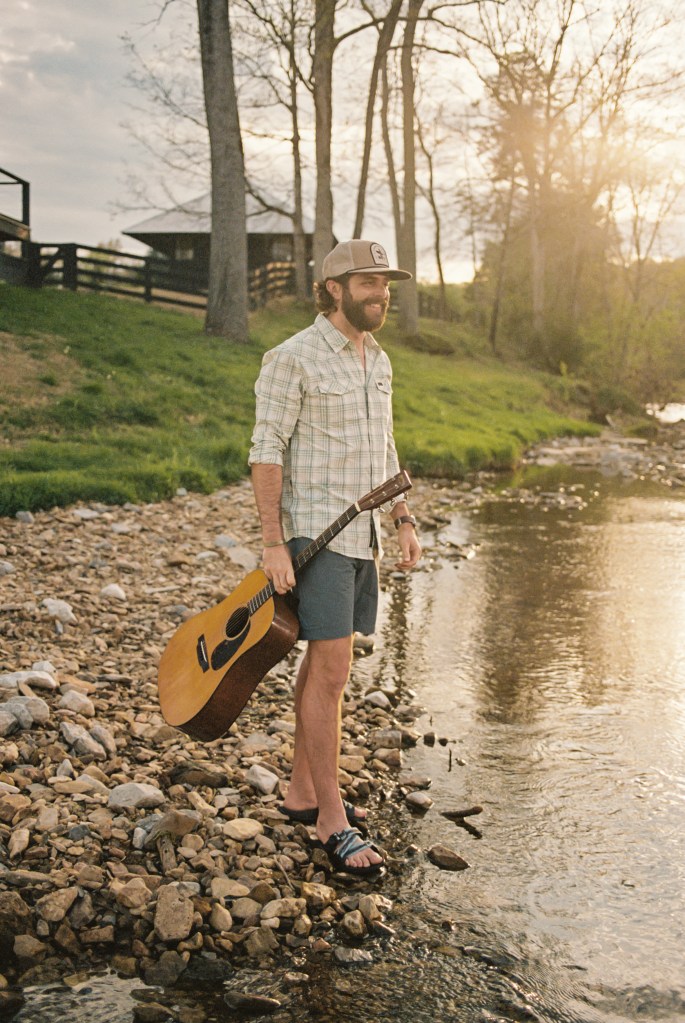 Reflections, the second release of the Thomas Rhett Collection is now available for men and women at chacos.com

What did the great outdoors mean to you during quarantine?

I think it was just kind of a saving grace. It was a year where [you] could have tried to entertain your kids just by playing a series of movies, and we definitely did that when we were desperate. But last year in 2020, we took our bus and literally just started driving, up to Glacier National Park, to Yellowstone, into Jackson Hole, Wyoming, into Moab, Utah, and Zion National Park. Those are just memories that I’ll have for the rest of my life. And getting into photography — a lot of the prints on these Chaco actually are based [on] the photos that I took on that trip out west.

What do you get creatively from being outside?

I think when your brain gets a chance to stop, it’s amazing the creativity that comes out of that. And I think just a lot of this record stemmed from me just taking a break for a second. It’s hard to continue to come up with ideas when you stop living.

You’ve said you’re a lifelong Chaco wearer — what is special about them?

Well, first of all, I talk about nostalgia a lot, but I started wearing Chaco in high school to summer camp, and that’s all me and my friends wore in college, and that’s all I’ve worn through my life. And even getting into fly fishing, they’re just the perfect all outdoor shoe that you can take on hikes, take in the water, spray them off, put them in the washing machine. They’re the all-terrain tire of shoes to me, and I don’t really go anywhere without them. And so when they reached out, I was like, “This is such a childhood dream come true.”

Is it true that one of the Chaco designs was inspired by your wife?

Yeah! So, on the Reflections Collection, there’s a shoe called Pink Sunset. And if there’s one thing in the world my wife can’t live without, it’s a sunset. We’re actually down here at the beach, and when it turns 6:30, my wife is wrangling every single person in the house to get on the bike and drive down to the beach because sunset is just non-negotiable. It’s just something that you don’t miss. And so anytime I’ve got my camera, and there’s a beautiful sunset, I’m snapping photos, literally just to flood my wife’s photo box with pictures of sunsets. And so this was actually a sunset [picture] that I took in Montana that they took all the color schemes and actually printed it onto a sandal, which is really neat.

What about the Big Sky collection for Chaco?

Big Sky was related to the Southern part of Montana. There’s one Chaco style called Montana Pastures, which is a pastoral kind of green representing a bunch of wheatgrass, more of the plains area of Montana. And then there’s one called Roasted Sky, which is another image that was definitely inspired by my wife. Just two different types of sunset photos are represented in Reflections and on the Big Sky collection. And it’s cool, because we’re doing the classic Z sandal, but we’re also doing the Chillos, which is more of their slide, slip-on shoes. So, there’s going to be something out there for everybody.

Lastly, I want to ask you about the organization Love One International, which proceeds from the Chaco collection supports. Tell me a little bit about it.

My wife’s on the board of the organization, and she went on a trip to Haiti with them, and then they started another base camp in Masindi, Uganda, which is where our oldest daughter, Willa Gray, is from. And for the last five or six years, it’s been incredible to watch it grow, and [it’s] been incredible to see how well they take care of these kids, giving them food and water and shelter and medical care. Just being able to raise money that you can actually see making a difference is something that you just can’t really comprehend.