Justin Bieber made a surprise appearance in Vegas this weekend, taking the stage for an impromptu performance at the opening of the h.Wood Group’s new supper club Delilah, located inside the Wynn Hotel.

The singer had been in town for a previously-announced gig at the Encore Theater Friday, but his appearance at the Delilah grand opening had been largely kept under wraps, surprising even bold-faced guests like Machine Gun Kelly, Megan Fox, Miles Teller and Jared Leto, who were among the crowd of 500 or so gathered for the invite-only event.

Bieber took to the stage just after midnight Saturday, and performed an eight-song set that included hits like “What Do You Mean?”, “Holy,” and a stripped-down version of his latest single, “Peaches.” Toward the end of his set, Bieber called out to the crowd, asking for Kid Laroi to join him on stage, where the two performed their new song, “Stay.” Laroi had also joined Bieber at the Encore Theater show the night before for the debut live performance of the dancey, pop/punk track.

Watch: @justinbieber and @thekidlaroi surprise the crowd at the opening of the latest @hwoodgroup property, Delilah Las Vegas pic.twitter.com/ZEpkDyopOW

Bieber’s performance was a fitting introduction to Delilah at Wynn Las Vegas, which was designed to be a supper-club/lounge hybrid, with a focus on live music and entertainers (a jazzy cover band performed hits by the likes of Amy Winehouse and Adele prior to Bieber taking the stage, while burlesque-style dancers worked their way around the room). Started by the acclaimed nightlife and hospitality duo, John Terzian and Brian Toll, this is the second Delilah restaurant to open, following the original location in Los Angeles. As lifelong music fans, Terzian and Toll are known for incorporating performance spaces, microphones and even full-sized pianos in their venues, to encourage exactly the type of spontaneous scene that popped up Saturday night. 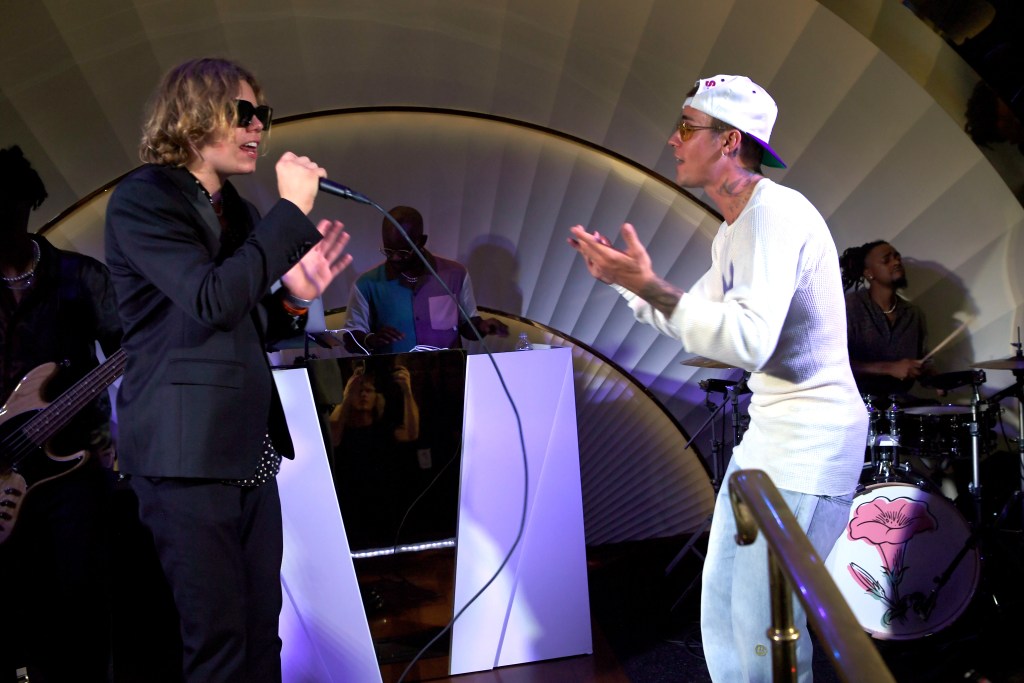 Bieber’s appearance Saturday followed a performance by Andra Day at Delilah on Thursday night, while Dave Chapelle surprised diners Friday with an impromptu stand-up set, that saw the comedian bring up Joe Rogen and Drake from the crowd.

As for Bieber, the singer is performing at the 2021 Made in America festival in Philadelphia this September. Tickets to the two-day festival, which also features Lil Baby, Doja Cat and Megan Thee Stallion, are available here.