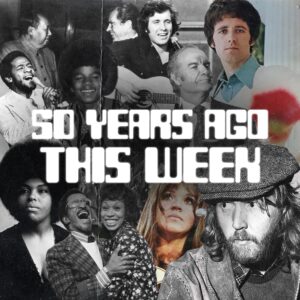 Jim Melloan spins the hits of the Top 40 from 50 years ago. He also supplies commentary and facts about the songs and their composers, the recording artists, and personal recollections. It’s 1972. Don McLean’s “American Pie” captures America’s disillusionment with the dreams of the sixties. Roberta Flack’s “The First Time Ever I Saw Your Face” is the most popular song of the year. Gilbert O’Sullivan sings of being Melloan Again—oops, Alone Again (Naturally). Harry Nilsson can’t live if living is Without You. Sammy Davis Jr. gives the year a sugar high with The Candy Man. Melanie’s got a brand new pair of roller skates and this guy has a Brand New Key. Chuck Berry has a resurgence singing about his Ding-a-Ling and Neil Young’s searchin’ for a Heart of Gold. The Moody Blues spend Nights in White Satin and The Raspberries Go All the Way. Nixon goes to China and beats McGovern in a landslide. The Watergate burglary happens but nobody notices (yet). Relive, or discover, the music of 1972 here.

Jim Melloan is an actor, editor, musician, and writer. He has been involved with the downtown NYC performance scene since 1996. He has worked as the project manager for the Inc. 500|5000 list of fastest-growing private companies for Inc. magazine, and as a writer for Worth magazine. He was a founding member of the ImprovBoston improv troupe in the early 1980s. He is a singer-songwriter who plays keyboard. Five years ago, he started doing a weekly post on Facebook about chart-topping hits from 50 years ago. In 2015 he expanded on the concept by starting an occasional column on this music for the downtown newspaper ChelseaNow, and creating the 50 Years Ago This Week radio show on Radio Free Brooklyn.