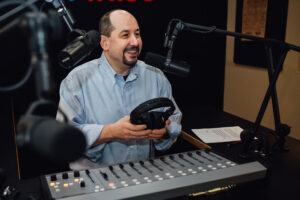 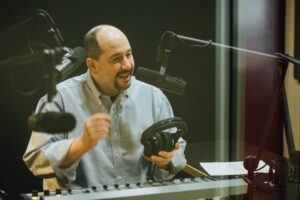 Gonzo brings his own special brand of entertainment to your radio station with a variety of great programming spanning several decades.

Gonzo Gates is an award winning* radio personality who has developed a variety of programming designed to help listeners remember radio the way it used to be.

Like many of his age Gonzo grew up listening to the great top 40 countdowns each week by Casey Kasem.  It was during that time that he developed his love of music and radio.  He began his radio career by creating a weekly show dedicated to the 1980’s called the 80’s Time Warp.  He currently writes, produces, and hosts several programs that span three decades including the 70’s, the 80’s, and the 90’s.  He entertains with fun stories, trivia, and games, not to mention fills each show plenty of soundbites and newsclips to transport listeners back in time.

In 2016 Gonzo Gates Productions teamed up with Mike Tyler and Kent Jones at Fishnet Syndication in an effort to bring his shows coast to coast.