WITH DAVE THE RAVE 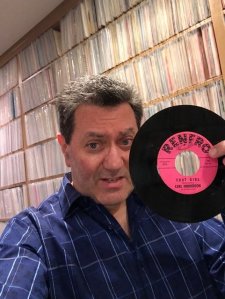 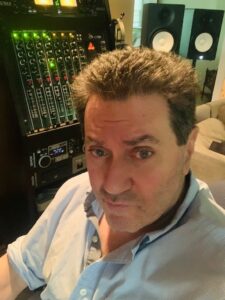 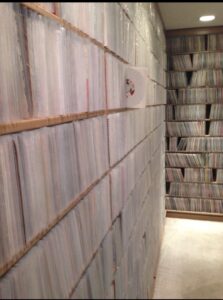 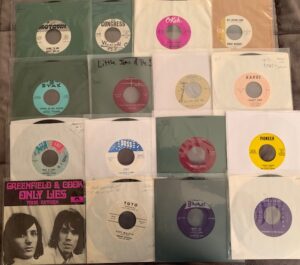 Dave Kapulsky has a room in his Freehold Township home that is lined with shelves filled with 45 rpm records. In fact, Kapulsky said, he has about *35,000 45’s and an additional 12,000 albums that he stores at his mother’s house in New Brunswick, where he grew up.

A disc jockey, he goes by the moniker Dave the Rave and carries about 2,000 titles with him to a radio station in Howell each Saturday night when he does his Relics and Rarities program. From 8 p.m. to 1 a.m. on WPDQ-FM (89.7), he plays well-known songs and rarities that he says never got the play they deserved. In addition, he takes calls from listeners, many of whom ask him to play a song they may have heard once years ago and remembered.

“Every week I pull out 25 to 30 45’s that have never been played before to play on my show. But there’s literally thousands that I want to play,” he said.

Dave the Rave said his show is very popular.

“I have some hard-core followers because I play songs that are not played by other disc jockeys. I get a lot of calls from Freehold, Howell and the Jackson area,” he said.

After the show ends, the discussion often continues at the Golden Bell diner, Freehold Township, where Dave and some of his listeners meet to talk well into the early morning hours.

His is mainly a 1960s show. He plays doo-wop, soul, surf music, garage bands and the sounds of the British invasion, he said.

“One of the things that is important to note about the show is that it not only features the big hits that we can all relate to and sing along to, but it also features the regional one-hit wonders or records that never made it,” he said.

Kapulsky’s first 45 that started his collection was “A Wonderful Dream” by the Majors on the Imperial label. This first 45 was acquired by winning a dance contest at the YMHA in Highland Park, NJ.

Shortly after that, his father gave him his first Beatles record.

“I was a big fan of the Beatles, and my father bought me Meet the Beatles, their first domestically released album,” he said.

But neither record is the oldest in his collection. The oldest record is a 1953 release called “Gee” by the Crows. But that is not an original, he said. The oldest original recording is “Rock Around the Clock,” by Bill Haley and the Comets, released in 1954.

“I call my oldies ‘Relics and Rarities’ because most of them are not big hits, but they sound like they should have been,” he explained, adding that someone recently dubbed him the “king of obscure records that sound great.”

Kapulsky’s interest in music and musicians led him to work at radio stations during high school and college.

“When I was a kid, I was the coffee boy and used to file records at WCTC-AM in New Brunswick. I had so much fun up there. Instead of paying me, they would say take some records and they would give me magazines.

“WCTC had a ’60s rock and roll show. I was the fan club president for the Friday night disc jockey, Larry Harmon. Harmon was also the music director at a larger radio station, WWRL, that catered to a black audience. He introduced me to a lot of black soul music,” Kapulsky said.

That led him to an abiding passion for collecting albums by musicians who never made it onto mainstream radio. But he doesn’t collect just to have the biggest collection of rare records. His passion is broader than that; it includes sharing what he knows and what he has with his listeners.

Perhaps more importantly, it includes the desire to give the black musicians who were not able to popularize their music the airtime that Kapulsky believes they should have enjoyed many years ago.

“So many people made great records and never got airtime,” he said. “Black musicians’ songs would come out and someone would say, ‘That’s a great record; let’s get a white group to do it.’ The Rascals’ hit “Good Lovin’ ” was originally done by a black group called the Olym-pics.”

The black groups’ only exposure was on small, black-owned radio stations, he said.

Kapulsky became aware of that fact at a very young age and wrote a letter to the editor of a New Brunswick daily newspaper that was published.

“Otis Redding had just died in an airplane crash. I was upset because Redding had such a hard time getting airtime on mainstream white radio. I eulogized Redding, calling him the King of Soul. After he died, his song ‘Dock of the Bay’ finally got airplay and was a No. 1 record,” he said.

Kapulsky said he sees the history of the civil rights movement reflected in black music.

“Many people loved what was considered black music. It brought people together,” he said, adding, “I get emotional when I think about the black artists that were excluded. There was an element that did not want black musicians on radio stations.”

But that is not to say his passion is for black groups only. He loves the Beatles and Bruce Springsteen, too. In fact, in 1989 Rolling Stone magazine profiled him and his passion for “The Boss.” He has a framed copy of the article on the wall in his family room along with gold and platinum records and other Springsteen collectibles.

Kapulsky went to Trenton State College, Ewing, (now The College of New Jersey). On his first day there he went to the college radio station and offered his services under his new radio name, Dave Richards. After graduating with a political science degree, he signed up for a graduate class at Rutgers University so that he would be eligible to work at the Rutgers radio station where he called himself Davo.

Five years ago, while cruising down Route 33 in his 1961 Corvette listening to an oldies station, he saw a billboard advertising another oldies station, WPDQ in Howell. He called the station managers, and they hired him. That’s when he metamorphosed into Dave the Rave.

Kapulsky and his wife, Kerri, have two children, Brittany, 14, and Jack, 8, who, his father said, is a frequent caller to the radio station.

“He calls and asks me when I am coming home. Sometimes he requests a song,” Kapulsky said.

An independent Prudential insurance agent, Kapulsky works out of his home in Freehold Township where he has lived for eight years. He keeps his collection under lock and key in a second-floor room.

He explained that many of the albums that he owns, he also has on CDs.

“People ask me why buy records when you have it on a CD? Sometimes records can be expensive, but I tell them that holding the original record gives me an historical context,” he said. “I can imagine the kid who owned it at one time. It’s like the difference between owning a reproduction of a work of art, or the real thing.”

Kapulsky pulled a 45 from his vast collection. He knew exactly where to find it.

“I bought a collection of 45’s from a guy who worked as a producer for Dick Clark’s American Bandstand. In the bunch was a 45 called “Slow Strip” by the Mega-tons. It was dropped off at Clark’s show with a note handwritten on the sleeve from Robert Ligotino, who lived in Spotswood at the time. He was asking Clark to play his record.

“It has now found a home in my ‘relics and rarities’ vault,” he joked. “But seriously, I would love to hear from a musician whose record I played, saying that I made his day.”

Kapulsky conducts his radio show the way shows were done in the 1960s by popular personalities like WABC-AM’s “Cousin Brucie” Morrow.

Morrow wrote a book that was published in 1987 called Cousin Brucie: My Life in Rock ’n’ Roll Radio. At the end, he asks, “Is radio anybody’s friend anymore?” He was still hopeful at the time and answered yes, as long as there are personalities like Springsteen who love rock and roll. But it has to be tended, he said.

Dave the Rave Kapulsky is trying to do that, tend the FM airwaves for rockers and rollers. Many of them are the grown-up baby boomers who came of age along with rock and roll. His show may be local, but it exposes people from Barnegat to Millstone Township, from Hightstown to the Jersey Shore, to records that they didn’t know existed.

“There are people out there who actually have the same passion. We feed each other,” he said. He added, with a hint of self-consciousness, “You’ll probably think I’m crazy, but I worry about what will happen when I pass away. I hope my kids will maintain my collection and make it available.”