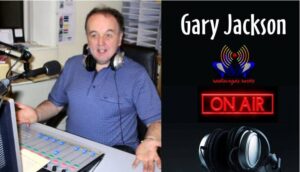 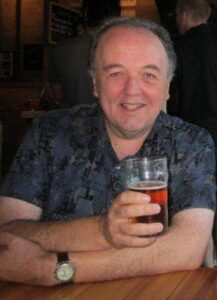 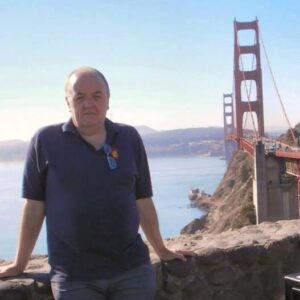 Like many radio presenters, I started as a mobile DJ. From there I went

on to hospital radio, and when the FM frequency beckoned, I jumped at the

It soon became apparent that other stations were sometimes short of

presenters, and the norm in those days was to play automated music. In

present there to date, and I soon realized that here was a gap that

Other stations followed including the legendary 1260KYA in San

Francisco, Castledown Radio in Wiltshire, and the Bigl, today’s

equivalent of 60s pirate station Radio London. (I have been broadcasting

live on the BigL from my south coast studio six days a week since 2013).

Soon stations all over the world started airing the shows. Some have

available, others have given them their own permanent slots.

Many people have asked who my favorite interviewee was, and the answer

has to be Stu Cook of Creedence Clearwater Revival. Not only did Stu

give me around twenty minutes, he was happy to talk about the days when

things weren’t good, and after all, Creedence was my all-time favorite

For the 60s, it has to be The Searchers who are friends, and I have

published their official website since 1997. As I have often said “On

the rare occasions when things were hard going, I went to see The

Searchers. Their sheer hard work and professionalism put me to shame and

gave me the kick up the backside I needed”.

My shows often feature guests, and interviews have included chats with

Frank Allen of The Searchers – always a delight, Mike Rutherford

Clark Five) and just about every other 60s band still working!

have also joined me!

My live radio work has taken me to California, and my shows now air from

Very much a fan of personality radio, I try to remember that the

listener comes first, I try to give my shows a live feel and keep

that” and the “back to front” song.

from Saturday Night Fever were guaranteed to fill the dance floor.

that listens, having always thought the most suitable audience would be

those who hadn’t a clue what he was on about.

approached by The Searchers to publish their official website which he

does to this day.

audience’s benefit, but because at his age just staying awake for two

hours are tough enough, and every little helps!